from The Star Press 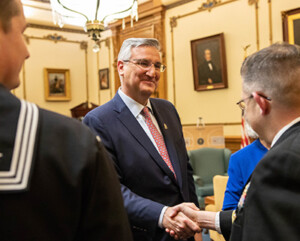 Gov. Eric Holcomb is the recipient of Meridian Health Services’ 2020 Spirit of Meridian Award. The annual recognition is awarded to someone who has contributed significantly to the overall health and well-being of people.

Holcomb has identified healthcare as a major initiative in his legislative agenda and specifically focused on attacking the opioid crisis as one of his five pillars of accountability, according to a release from Meridian. On his first day in office in 2017, Holcomb appointed the state’s first drug czar, tackling addiction and the state’s anti-drug efforts.

“In large part, the governor’s priorities mirror the ongoing work at Meridian. His support of these initiatives and demonstrating clear achievements made him our first choice for this annual award,” Hank Milius, Meridian’s president and chief executive officer, said in the release.

The 2019 Spirit of Meridian Award winners were Charlie Sursa and Fred Reese, recognized for a decade of work on Meridian’s philanthropic efforts.

This year’s award will be presented to Holcomb at Rialzo, Meridian’s annual charity gala, which will be April 18 at the Horizon Convention Center. Tickets/information: rialzo.meridianhs.org

Past Spirit of Meridian Winners