from the Star Press 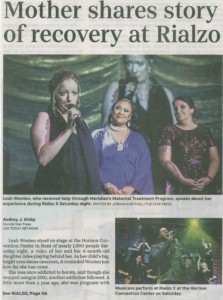 MUNCIE, Ind. — Leah Wooten stood on stage at the Horizon Convention Center in front of nearly 1,000 people Saturday night, a video of her and her 6-month-old daughter Jolee playing behind her. As her child’s big, bright eyes shone onscreen, it reminded Wooten just how far she has come.

She was once addicted to heroin, and though she stopped using in 2010, another addiction followed. A little more than a year ago, she was pregnant with Jolee and addicted to opioids, which were supposed to ease her pain from Crohn’s disease.

“I was pretty close to rock bottom,” Wooten said. “It was a dark time in my life.”

But as she stood on stage, watching the video at Meridian’s 10th annual Rialzo charity gala, she was there to show everyone that it’s possible to seek help and recover.

The smiles of her now-healthy, happy daughter in the video prove that.

Saturday night not only marked a decade of Rialzo, but also the third consecutive event during which Meridian raised money specifically for its Maternal Treatment Program. Meridian President and CEO Hank Milius told the crowd that the program serves “the special, most vulnerable patient population” by providing treatment, care and support.

The program officially started taking patients in the summer of 2017 at Meridian’s Suzanne Gresham Center. Since then, 80 mothers have gone through the program and 21 babies have been born free from drug exposure or neonatal abstinence syndrome.

Rhea Graham sees the impact firsthand. She started working with the Maternal Treatment Program as a mentor and helped Wooten through recovery. And just a month ago, she officially became a member of the staff as a peer recovery specialist.

As someone who faced addiction herself — and who is now five years clean as of this month — Graham has experience she can share.

“Drugs are just the symptom of the problem,” she said. “And if we don’t get into what’s inside, what’s broken, what’s hurting, the reason why we don’t want to feel things, why we want to use drugs, then we’ll never stop using drugs.”

Wooten enrolled in the Maternal Treatment Program in March of 2018, going three days a week for 21 weeks. Graham said part of Wooten’s treatment involved Suboxone, which helps prevent withdrawal symptoms. She said Wooten was determined to be drug-free when she had her baby and was weaned off the Suboxone in time. Shortly after completing the program, Jolee was born.

On Saturday night, Graham stood on stage by Wooten’s side to ask the guests for donations so the program can help more mothers and babies.

In the past two years, Meridian raised more than $375,000 for the program, totals boosted boosted thanks to a donation of $50,000 per year from Meridian’s board of directors in memory of Al Rent, a longtime Meridian contributor. The 10th Rialzo included a variety of ways to possibly top recent yearly totals, with the third installment of $50,000 in Rent’s honor. The event also had the support of community sponsors, including The Star Press which contributed $5,000 from its Children’s Charities fund, built by readers, to go directly to the program.

With its theme, “Oh, The Places You Will Go,” Rialzo X gave attendees the chance to support the cause by bidding on, buying or entering raffles for several trips and experiences including a Walt Disney World vacation and an African safari.

When the final fundraising tally is totaled, the money will work to help more mothers and babies live happier, healthier lives.

Wooten said it was “humbling” to be at Rialzo on Saturday, to watch the video that showed her progress and to share her story with the community.

Not only is her daughter Jolee sitting up, but Wooten said she’s strong and very active. So much so, Wooten jokes, that her mother can’t hold her too long before she’s ready to move again.

To mothers out there struggling with addiction, Wooten encourages seeking help and taking it when it’s offered. She’s thankful to be where she is now because of doing so.

“At that time, we’re all hopeless and helpless,” Wooten said. “Reach out. Take in any ounce of information that you can.”