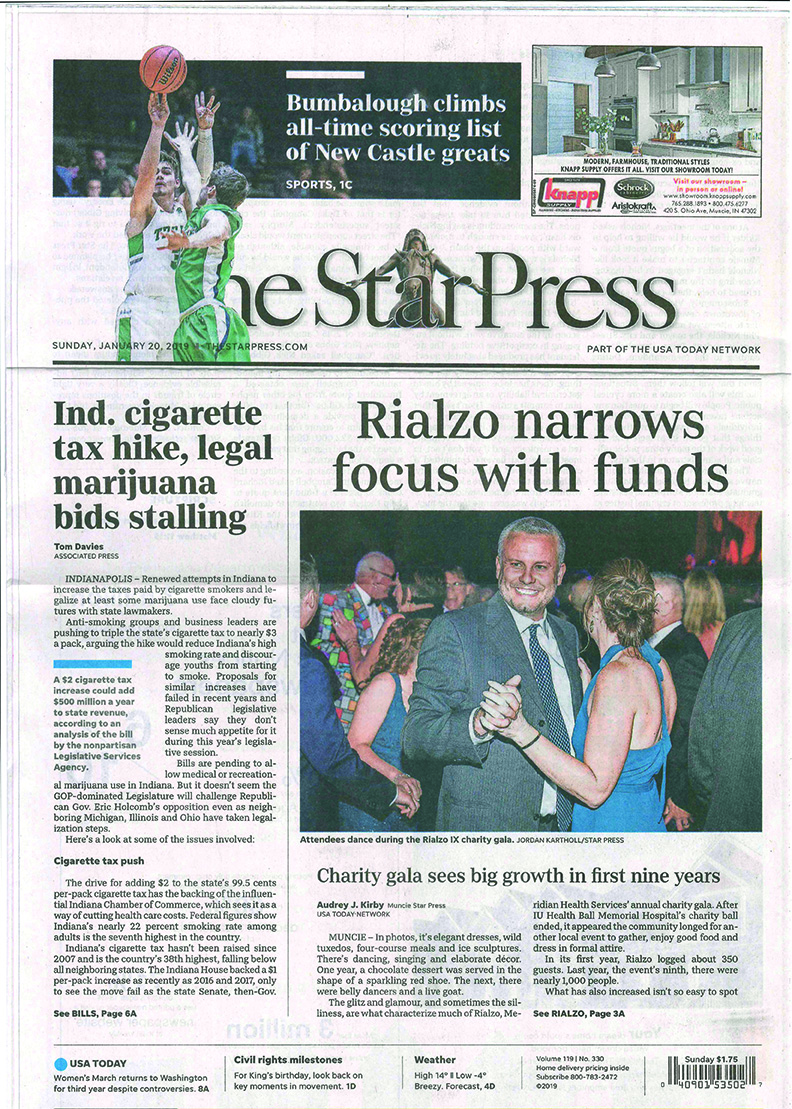 In photos, it’s elegant dresses, wild tuxedos, four-course meals and ice sculptures. There’s dancing, singing and elaborate décor. One year, a chocolate dessert was served in the shape of a sparkling red shoe. The next, there were belly dancers and a live goat.

The glitz and glamour, and sometimes the silliness, are what characterize much of Rialzo, Meridian Health Services’ annual charity gala. After IU Health Ball Memorial Hospital’s charity ball ended, it appeared the community longed for another local event to gather, enjoy good food and dress in formal attire.

In its first year, Rialzo logged about 350 guests. Last year, the event’s ninth, there were nearly 1,000 people.

What has also increased isn’t so easy to spot but remains Meridian’s focus: fundraising. The health organization even changed the event’s tagline a few years ago from “party with a purpose” to “purpose with a party” to emphasize it.

That purpose typically changes each year, but for the past three, it has been combating the same community issue. The 10th Rialzo — Saturday, April 27, at the Horizon Convention Center — will mark the third consecutive year Meridian has raised money for its Maternal Treatment Program, which provides care and support for mothers struggling with addiction to opioids.

A look back at the previous nine years of Rialzo shows that as funds continue to grow, the focus is narrowing.

The more specific, the better

Two years ago, Cathy Hardwick tore her ACL. It was February, and knowing that Rialzo was just two months away, she scheduled her surgery for the week after the event. She had been to the previous six Rialzos and had no plans to miss her seventh.

“I couldn’t imagine everyone being there, and me being home,” she said with a laugh.

A select few, like Cathy and her husband Mark Hardwick, First Merchants Bank chief operating officer, have been to all nine Rialzos and are set to attend the 10th. As guests, they spent an evening “under the stars” at Rialzo VII and a night in Oz at Rialzo VIII. They heard Rick Springfield yearn for “Jessie’s Girl” when he performed during Rialzo V and then danced the night away to national cover band “The Blasters” at Rialzo IX. Each year, Cathy said, is more exciting than the previous. The hype has attracted not just the wealthier, but also the younger audiences.

It’s hard to believe that the first Rialzo in 2010 lost money. Actually, the second one did, too.

“Those first few years, it centered around us trying to educate people what Meridian really was,” Scott Smalstig, Meridian’s vice president of fund development, said. “But as it’s evolved, people have become more familiar of Meridian. We’ve focused a lot tighter on specific causes, and that’s really where people jumped on board.”

Rialzo ended its third year on the positive side, making about $23,000 according to figures submitted by Meridian. Smalstig, however, said he felt the group really made progress with Rialzo VI, which raised nearly $131,000 and helped replace near-50-year-old playground equipment at the Suzanne Gresham Center, previously Morrison Mock Elementary.

Event planners continue to develop new ways to bring in, and save, money. They’ve recently opted for less expensive dance bands that are, in turn, more friendly for all ages. They’ve mixed in other fundraising features like a live auction, a silent auction, a raffle and a diamond dig where guests pay to search for precious jewelry. All profits go to the cause.

This year, Meridian is suggesting guests wear their favorite dresses from years past to Rialzo X and put that saved money toward the Maternal Treatment Program.

Witnessing the party, and the impact, firsthand

Meridian raised about $175,000 from Rialzo VIII and $201,000 last year, totals boosted thanks to a donation of $50,000 per year for three years from the board in memory of Al Rent, a longtime Meridian contributor who died in 2017. Now, more than 150 volunteers help put the night together, and Meridian has accumulated more than 75 corporate partners.

“It’s one more good event for downtown. The revitalization of any community starts with the downtown area,” said Meridian board member Mike Lunsford, whose Coldwell Banker Lunsford realty group has become one of the event’s top sponsors.

Money raised made it possible for Meridian’s Maternal Treatment Program to open in June 2017. Leading a tour of the facility that summer, CEO Hank Milius noted that addictions services like these are not moneymakers for his organization.

“With Rialzo, it helped enable the program to get developed,” Beth Clark, Meridian’s vice president of marketing, said. “Part of the reason the past three years we’ve been so dedicated is because it’s such a great need.”

Since the Maternal Treatment Program’s creation, 71 women have been through the program, 19 babies have been born during the time frame and zero have been diagnosed with Neonatal Abstinence Syndrome, which occurs when a baby withdraws from drugs after being exposed to them while in the womb.

Cathy Hardwick found a way to help the event’s most recent cause through hands-on work. Her interior designing experience, along with being a 10-year volunteer at First Choice for Women and managing the Parent Care Baby Store for the past six years, helped her understand what mothers would need while going through the Maternal Treatment Program. She furnished and decorated the room at the Suzanne Gresham Center to make it feel safe and welcoming.

“I think the first year (Rialzo raised money for the program) made most of us aware of what was going on, and now we know the need is there,” Cathy said. “People are really starting to understand the significance and putting money into helping these individuals.”

Rialzo organizers acknowledge that while fundraising is their focus, many of the attendees might more clearly remember the dancing, the four-course meal and the glamour of it all. And that’s fine. Part of the process in raising money is enticing new guests to attend, while providing new features so guests will return.

Besides, the fulfillment comes when the total number is read, and then it’s off to work to put the money to use. The fundraising on April 27 will help increase capacity at the Maternal Treatment Program, providing additional salaries and personnel, as well as extra resources.

Clark said it’s neat that Muncie, where Meridian is headquartered, has continued to keep the event sustaining and growing. As more guests attend, more are buying dresses locally and renting tuxedos. Downtown Muncie is hopping until 2 a.m., and the nearby Courtyard Marriott downtown fills up.

This year’s Rialzo holds the theme, “Oh, the Places You Will Go.” Both Smalstig and Clark feel it fits because previous Rialzos have made for quite the journey.

As for what’s in store for future Rialzos, according to Smalstig, “I really think we’re just scratching the surface.”