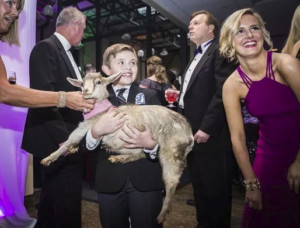 MUNCIE, Ind. — It was evident the opioid crisis hits close to home for many local residents as a group of 1,000 echoing voices within the Horizon Convention Center quickly fell silent Saturday night.

Terry Whitt Bailey, director of community development with the city of Muncie, stood at the podium at Rialzo IX, Meridian Health Services’ annual charity gala, and informed the large crowd of some alarming statistics. She said in 2000, one in 200 children born in local hospitals were addicted to drugs. Twelve years later, that number jumped to one in 10.

Bailey noted these are children that attend the same public schools and live within local neighborhoods. “They all deserve our love,” she told the crowd.

As the crowd listened and softened their voices, they then opened their wallets. A heart graphic displaying on monitors gradually filled to demonstrate money raised for this cause. Before the live auction even began, that heart graphic overflowed as fundraising surpassed the $150,000 goal. And it kept going.

Last year, Rialzo’s theme was “There’s No Place Like Home,” which correlated with the organization’s efforts to start up its Maternal Treatment Program. That program opened last June to care for drug-addicted mothers and their newborn babies.

This year, the theme was “A Whole New World: Elevating Meridian’s Maternal Treatment Program,” which was more about adding to what had already been started.

“The turnout has been fabulous,” Clark said, looking around at the room of nearly 1,000 guests. “And all of the community support has just been so rewarding. It’s great to see so many people come out to support us as we work to make our community healthier.”

Clark said the Maternal Treatment Program has taken in more than 40 mothers, and two-thirds of the babies born haven’t had to be treated in the Neonatal Intensive Care Unit.

During the Rialzo IX presentation, Meridian honored Delaware County Prosecutor Jeff Arnold with the Spirit of Meridian award for his work in helping the Maternal Treatment Program, connecting mothers in need with the program’s services. Also, Cornelius and Mary Dollison were recognized for receiving the Sagamore of the Wabash.

The night wasn’t all serious. Guests enjoyed signature drinks, a live and silent auction, raffle prizes and dancing along to “The Blasters” to close the evening.

And yes, there really was a live goat.

Meridian will tally the net funds raised later this month.

Audrey Kirby is a digital producer at the Star Press. Follow her on Twitter @ajanekirby, and email her story ideas: ajkirby@muncie.gannett.com.