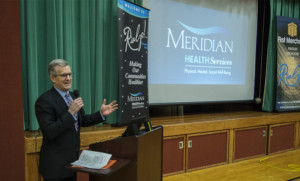 from The Muncie Journal

Muncie, IN—Meridian Health Services’ Rialzo, its annual charity gala, will have a distinctively magical feel this year designed to focus on the new Maternal Treatment Program.

Beth Clark, Meridian’s Vice President of Marketing, unveiled the theme for Rialzo IX at a press conference yesterday which is, Meridian’s Magic Carpet Ride – Elevating the Maternal Treatment Program.  “Styled with an Arabian Nights décor with hints of the Aladdin story in the entertainment and room design will express the beautiful elegance of the theme,” she said.

Information on Rialzo IX and Meridian’s Maternal Treatment Program was presented at a press conference at the Suzanne Gresham Center on Wednesday.

Vibrant jewel tones of pink, purple, orange, teal and gold, the suggested attire, and a romantic desert theme stands in stark contrast to the serious work Meridian does with drug-addicted mothers and their infants, a pledge started a year ago that continues this year and in 2019 to better support the heightened demand.

“The Board of Directors for Meridian Health Services is committed to making a difference,” said Hank Milius, Meridian’s CEO. “The board pledged $50,000 a year for three years in memory of longtime board member and community icon, Al Rent.”

Combined with money raised at Rialzo VIII, Meridian has given well beyond $150,000 toward the cause so far.

Rialzo IX is Saturday, April 14 at the Horizon Convention Center.

The entertainment this year is The Ballroom Blasters, the featured 14-piece party band with four horns, five national-caliber vocalists and a song list of 800, is set to play for three and a half continuous hours.

Rialzo IX will include a silent auction with a distinct Arabian bazaar market feel.

The need for addiction care for mothers was pinpointed more than a year ago by Terri Milius, wife of Meridian’s CEO Hank Milius. The former nurse, retired teacher and volunteer at IU Health Ball Memorial Hospital’s Cuddler program, felt the tug to do more for infants born into addiction.

These babies suffer from Neonatal Abstinence Syndrome, or NAS. According to the latest available data from the New England Journal of Medicine, admissions of infants suffering from withdrawal into NICUs nationwide have nearly quadrupled from 2004 to 2013.

More than 13,500 babies are born each year in the United States with an addiction. At IU Ball Memorial Hospital, one in two babies are born addicted. According to hospital statistics, of the more than 1,400 babies delivered last year at IU Health Ball Memorial Hospital, 15 percent were tested for maternal drug use and 8.5 percent showed positive results. Nationwide – in  2013, according to the latest available data from the Center for Disease Control – a baby was born addicted to narcotics every 25 minutes in the U.S.

Learn more about the Maternal Treatment Program by viewing the video below.