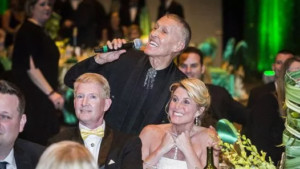 MUNCIE, Ind. — Thanks to the help of community members and partners, Meridian Health Services will be dedicating more than $150,000 toward the organization’s maternal treatment program for drug addicted pregnant mothers and their newborns, according to a release.

Meridian’s goal going into its annual charity gala, Rialzo VIII on April 8 at the Horizon Convention Center, was $150,000.

That goal has since been surpassed with donations still coming in.

“Rialzo 8 was our best yet, mostly because of the integration of theme (“There’s No Place Like Home”) and cause, which led to the unprecedented response,” Scott Smalstig, vice president of development at MHS, said. “We were not only up in every revenue category, but donations are still coming in!”

There is still a chance for people to donate to the program with a gift or pledge.

According to a release, 1 in 10 babies born at local hospitals are withdrawing from drugs. Meridian’s new program will help mothers create a “No Place Like Home” atmosphere and a better chance at life for their newborns once they return from the NICU. Smalstig said the program starts June 1. Donations can be made at merdianhs.org.